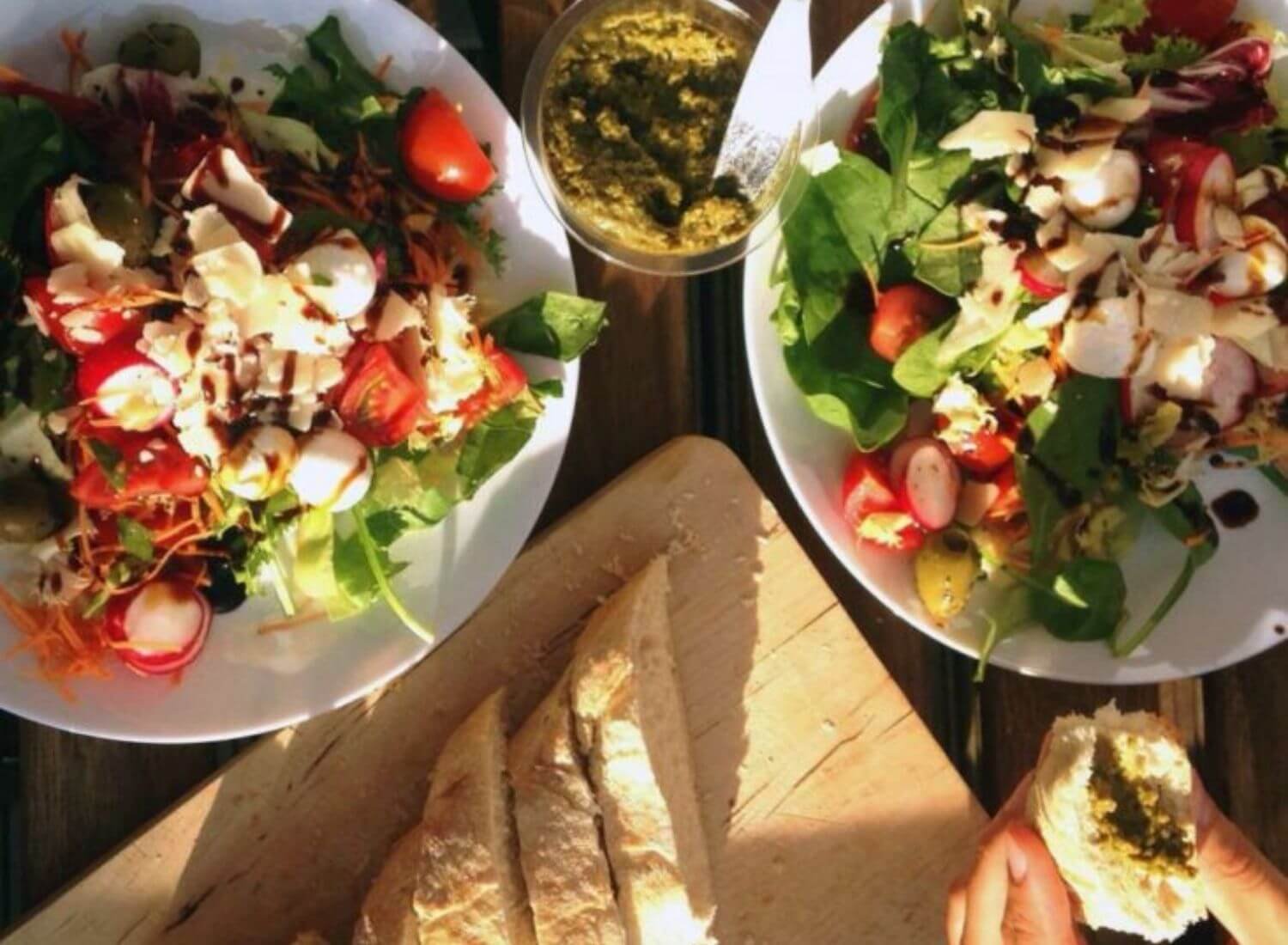 Are Traditional American Dishes healthy? Americans are widely known for their unbeatable love for fast food. The multi-millionaire fast food industry is also a health trendsetter, from demanding health-oriented alternatives from brands and vegan trends to creating the latest avocado recipe! But these traditional American dishes don’t depend on swaying trends or the newest funk created by an influencer. Instead, these recipes come from home.

Read here about 10 Traditional American Dishes and recipes that have been passed down from generations, from grandma to her grandsons, cooked in a mother’s kitchen from as far back as the early ’50s, and continue to warm hearts during celebrations.

Although originating in England, the Apple Pie is considered as the unofficial symbol of the United States. Brought to the States during colonization, Apple Pie quickly settled its presence in American homes as one of the traditional American dishes and a widely known comfort food. With a crispy buttery crust and the refreshing taste of juicy apples, this dish can be made by first preparing the crust.

The golden brown color of this Traditional American Dish can be achieved by mixing all-purpose flour, unsalted butter, sugar, salt and refrigerate the dough in shape required 1-2 days beforehand. An alternative for the crust is to use a pre-prepared frozen crust from the store and follow the package’s instructions. The apples are then peeled, cut and a little lemon juice is poured over them to prevent the apples from browning. These apples, along with flour, nutmeg, allspice, sugar-cinnamon, and vanilla, are used for the filling and baked for over 20 minutes in the oven to receive their perfect crisp and golden color.

While apple pies are often double-crusted and use sugared seasoning, apples are considered rich in antioxidants, and apple pies are high in sodium and fiber. This Traditional American Dish is healthy in its own way and welcomed by many Americans. They coined the phrase “for mom and apple pie” as a reply from American soldiers during World War 2 when asked why they were going out for war!

The official state cuisine of Louisiana, Gumbo is a Traditional American Dish nestled in the warmth of many homes. Although Gumbo is derived from native dishes, it includes culinary practices from countries like France, Spain, Germany, and some African countries.

Gumbo, a soup with a rich broth and health-oriented ingredients, can be made by first whisking flour and bacon over low heat until it shows a rich brown color. The bacon can be substituted with meat, shellfish, or any vegetarian alternative. After 20 to 30 mins of whisking, finely chopped vegetables such as celery, green bell pepper, onion, and garlic are added and cooked for 2-3 minutes. The Gumbo is then cooked with okra or filé used as a thickener to serve a simmering pot of delicious soup. However, variants of Gumbo show that this dish can be prepared without using okra or filé powder.

Okra is known to be nutritionally rich, containing antioxidants, and remains a quintessential part of the dish. Gumbo boasts of its high protein value with popular variants called Creole Gumbo, New Orleans Gumbo, and Cajun Gumbo!

Bologna Salad Sandwich, a healthier version of the Bologna Sandwich, is a quick healthy treat popular in Northeastern Pennsylvania of the United States. Eaten cold over afternoon coffee or carry along your favorite picnic trail. This traditional recipe includes grinding the bologna sausage and pickles in a mixture mixed with salad dressing or mayonnaise and then spread over sandwich bread, ready to eat!

Some recipes include adding a hard-boiled egg or crushed onion to the mixture before preparing it for a delicious little twist. Despite the considerably low quotient of protein compared to the carbohydrate and fat levels, the Bologna Salad Sandwich is a refreshing and filling alternative for fried snacks and is just as yummy!

Originated from the Eastern United States, Clam Chowder is one of those traditional American dishes that is now sold in restaurants all over the country. Extending beyond the four walls of home, Clam Chowder has been appreciated by many Americans and people worldwide for its creamy texture and the contrasting flavor of saltiness and smokiness present in every bite.

Served usually with a salt line or oyster crackers, Clam Chowder includes celery, onions, diced potatoes, salt pork, usually cooked in a broth or milk with clams. Clams are low in calories and fat and are a good source of protein and minerals but being dressed in cream and milk in this dish increases the calorie intake. This dish’s popular variants are New England Calm Chowder, Rhode Island Clam Chowder, and Manhattan Clam Chowder.

Hoppin John, also known as Carolina Peas and Rice, is a rice dish, just as its name suggests, a recipe originating from Carolina. This traditional American dish is a simple healthy recipe where black-eyed peas are used along with chopped onion, salt, and sliced bacon put together with cooked rice. Bacon can be substituted by ham, smoked turkey, chicken, or even fatback. However, the traditional dish involves smoky bacon, Carolina Gold Rice, salt, pepper with sea island red peas, or cowpeas for the perfect balance in the Hopping John’s subtle taste.

This traditional American dish holds an incredible amount of nutritional value with its simplistic ingredients and symbolizes wealth in the area, eaten on every New Years Day. Hoppin John is believed to bring prosperity to life with the peas depicting pennies and served alongside green vegetables, the color of money in the United States!

Cornmeal, whole wheat flour, baking powder, cinnamon, nutmeg, and sugar are first mixed in a large bowl to create a rough mixture that serves as the base of this traditional American dish. A small hole is then made in the middle of this mixture, where fresh milk and vanilla are poured and whisked continuously. Fluffy egg whites are then added to the mix, and the result is poured into cups and baked to form a healthy version of this fluffy golden bread.

Cornbread, one of the top comfort foods in the United States, has been a part of the native cuisine for generations. Prepared as muffins or baked into creamy cakes, Cornbread adapts to every man’s taste with its soft and fluffy texture and lightly sweet taste. Free of oil, cholesterol, Cornbread is perfect for those looking out to lose excess weight!

It is only fitting to talk about Grits while we are talking about Cornmeal! Originating from a Native American Tribe, Muskogee’s recipe, Grits is made by boiling milk or water with proportionate cornmeal and mixing it to achieve a milky yellow color. It is often served with salt, pepper, and bacon.

Grits is a type of porridge that proves to be one of the healthiest breakfasts to start your day with. While it may not be a working man’s breakfast but for those that look out to balance their calories and manage their diet, Grits serves as a breakfast dish rich in proteins and carbohydrates combined— a perfect start to your day!

Cobb Salad is an unmistakable gem on the list, popular by name and taste. Said to originate around 1937 at a Hollywood Brown Derby restaurant, this dish is a simple mix of the common ingredients at home like iceberg lettuce, watercress, tomato, romaine lettuce, eggs, avocado, chives, bacon, chicken breast, and cheese.

One really cannot go wrong with greens when looking out for healthy food, especially with Chicken Breast in the mix. The Cobb Salad, easy to the tongue and delicious in taste, is a guaranteed favorite for all who love health-oriented food.

Texas Barbecue was introduced to Americans in the mid 19th Century, after which it spread far and wide for its hard grilled meat and chewy texture. Beef brisket, pork, and sausages are commonly put on the grill to bring justice to the name.

While the name questions its spot on the list, Barbecuing essentially helps lower fat consumption and increase the flavor of the meat prepared!

10. Turkey and the Thanksgiving Dinner

Thanksgiving is a national holiday celebrated throughout the United States where a whole turkey is roasted as a sacrifice and an appreciation for the blessing of a harvest. Traditional American dishes such as mashed potatoes, cranberry sauces, and stuffing are usually served alongside a whole turkey, which is placed at the center of the table. Originally, however, lobsters, clams, berries, fruits, and pumpkins were also served as a part of this meal, but with the change in times, this meal channeled down to tastier and well-cooked side dishes.

Healthier side dishes include sweet potatoes and asparagus stuffing for a nutritional outlook to the menu. When used instead of canned cranberries, fresh cranberries, sweetened with honey and fresh orange juice, serve as a healthier alternative as well.

These 10 dishes are simply the top of the pyramid from the vast ocean of native American dishes that are yet to be discovered and presented to most of the world. They are simply the recipes of those that have toiled to bring warm food on the table for their families, to express gratitude, and bring forth the reveling deliciousness of dishes that you cannot help taking a bite of!

17 Dishes you must try out when in Allahabad

Allahabad, officially known as Prayagraj, one of the holiest...
Read more

Somalia, located in the Horn of Africa, is an...
Read more
Previous article
12 Dishes to try out when in Osaka
Next article
28 Desserts You Must Try out when in San Francisco