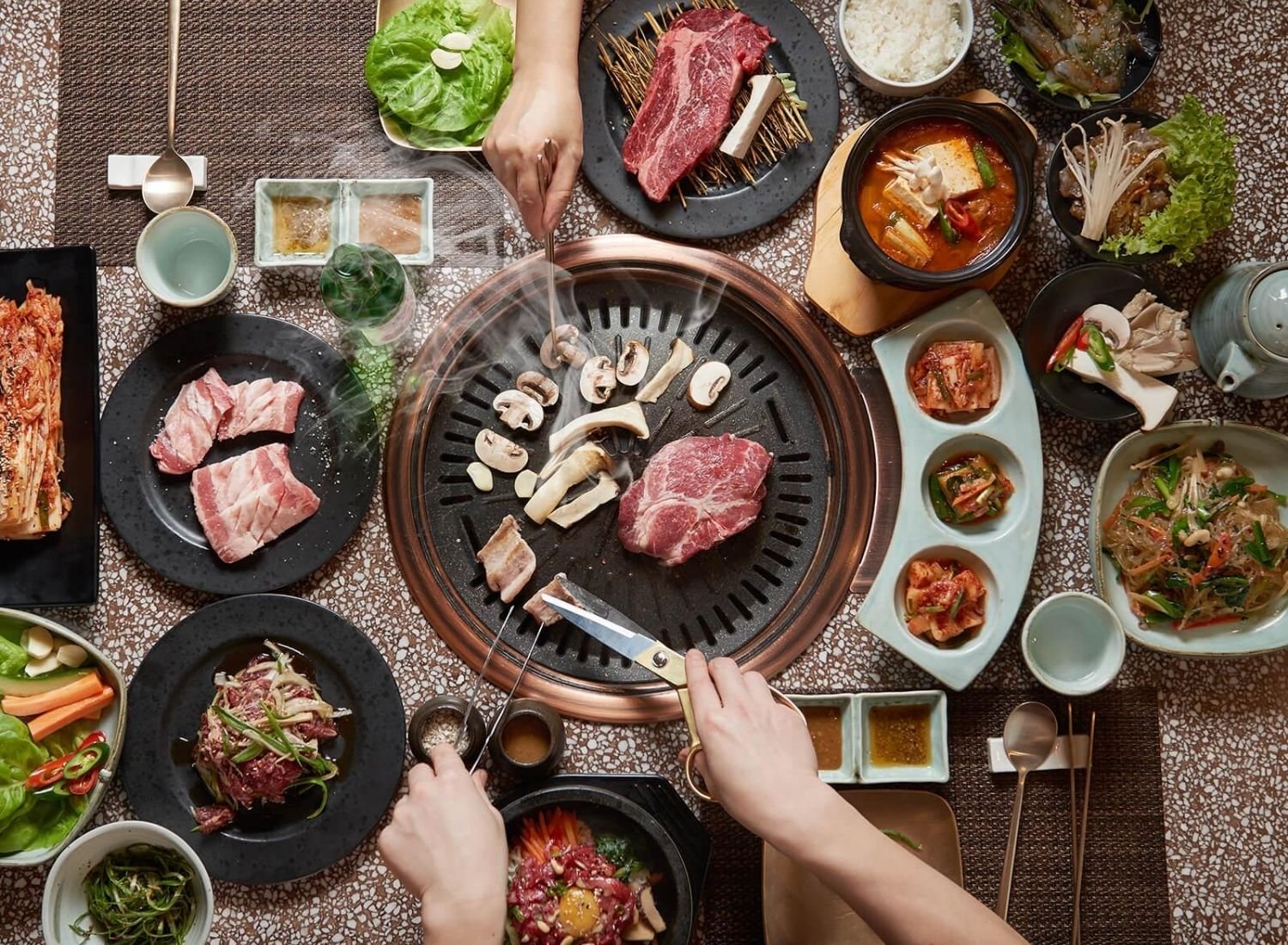 Talk of the town, South Korea has walked into the hearts of people all around the world with its music and popular Korean dishes. With music groups like BTS and Blackpink as well as Academy Award-winning movie Parasite, the Korean wave is hard to miss! Why then must the food industry lag behind? Here are fifteen of the most popular Korean dishes that will surprise you:-

Mul Naengmyeon is a noodle dish primarily served in an icy cold broth. It is here to chase your summers away! A noodle dish that is generally perceived to be a hot and spicy food item gets a revolutionary twist in this innovative dish. Long and thin noodles are first made using flour or starch from various ingredients like buckwheat, potatoes, sweet potatoes, and arrowroot starch served in cold soup with the broth made from beef, chicken, or dongchimi (radish kimchi).

But wait! Food knows no discrimination, and the vegetarian alternative for this popular Korean dish can be made using a vegetable broth mixed with ginger root, garlic, green onion with drops of vinegar, an appropriate amount of sugar, and soy sauce.

Tteokbokki or stir-fried rice cakes is an easy favorite for all those that enjoy late-night spicy snacks. Sweet and chewy rice cakes are steamed hot and stirred in a sauce of its own kind, a mix of chilly paste and soybean paste to intensify the spicy savouriness of the dish! Defined by its bright red and orange visual, Tteokbokki is typically sold at street vendors and individual snack bars.

Traditionally, Tteokbokki is served with soup and stir-fried with fish cake, onions, diced garlic, salt, sugar, and additional vegetables in sweet chilly sauce. Spicy and tangy to the tongue, Tteokbokki is considered the best alternative to spice out any stress!

Recently popularised by the Oscar Winner for Best Motion Picture, ‘Parasite,’ Chapaguri is merely a mixture of two prominent Korean instant noodles—Jjapagetti and Neoguri. Jjapagetti is the instant version of Korean Black Bean Noodles, which is usually served dry while Neoguri is inspired by an Udon noodle dish that is served in a spicy broth.

Together, they form a unique combination of sweet, savory, and a surprising spiciness. Addictive in taste, the first bite promises of slight sweetness and savouriness of the Jjapagetti noodles, eventually shocking with a spicy kick of the Neoguri taste. If staying on trend is your niche, Chapaguri is simply something you cannot miss out on!

No Korean meal is complete without rice, and this one is no exception! Translating to “mixed rice with meat and assorted vegetables,” Bibimbap stands a national favorite to make at home for Koreans.

Vegetarian Tip: The meat or meat sauce can be replaced with a mix of soy sauce, minced garlic, sesame oil, and brown sugar with spinach, bean sprouts, and carrots for vegetables. The dish can then be seasoned with shredded seaweed strips on top of the readied bowl to taste the delicious and healthy crunchy taste of Bibimbap!

Dessert with a surprise, Patbingsu is a strange combination of shaved ice and red bean paste. Visually appealing with the stark contrast of white ice shavings and red-thick paste, this dish traditionally existed between 1392-1897. It has toppings like red bean paste, tteok (rice cakes), and groundnut powder. Modern versions of the same include green tea, coffee, and even yogurt flavors!

Patbingsu is easy to make, a delightful dessert that can be enjoyed and created by people with varying tastes and preferences. For a fruity and fulfilling experience, Koreans also top it with fruits, fruity syrup, condensed milk, and red beans. Want to make something at home but afraid to mess it up? Patbingsu is the dish for you! Bring a smile to everyone’s faces with the sweet and pleasant taste of this ultimate make at home dessert.

Kimchi is the Aachar to every Korean’s home, a staple in Korean cuisine! Unlike other pickles, Kimchi first requires salting and gives leeway to variety as it can be made from just about any vegetables like cucumber, radish, water radish, cabbage, mustard leaves, and many more. This side dish of salted and fermented vegetables is seasoned in chilli powder, spring onions, ginger, and garlic to give it a sour, crunchy sound every time you bite in!

In a simple sense, Bibim Naengmyeon is a little bit of Bibimbap as well as a type of Naengmyeon. Unlike Mul Naengmyeon (cold noodles), this one is primarily served with a dressing made from spicy gochujang (chilly red paste) and eaten while mixed in water.

Bul meaning Fire and Gogi, meaning Meat translate the dish to marinated meat barbeque. Bulgogi is a dish excessively appreciated by meat lovers in South Korea, often grilled with garlic and sliced onions to enhance the flavors of the meat. The juicy, savory meat in this popular Korean dish is often wrapped in lettuce with other stir-fried vegetables and eaten when dipped in ssamjang (a thick red spicy paste).

Hotteok, also named as Hoeddeok, is a Korean-styled pancake that can be eaten as both a snack as well as a dessert based on the filling. It is a popular Korean dish made from basic yeast dough with a sweet syrupy filling made from brown sugar, cinnamon, and walnuts.

The outer appearance of the chewy Hotteok is a golden crisp made from frying in a little pan with oil. Some variants include a little cheese in it to maximize the flavor of this Koren dish immensely.

Bid all bitter health food items goodbye as you take a sip of ginseng entailed Samgyetang! To keep your stamina up in enduring summers, Samgyetang translating to Ginseng Chicken Soup, is the perfect ailment.

Ginseng is the root of a plant species that helps boost the immune system and decrease stress levels, helping in overall health balance, a key element of samgyetang. The making of this popular Korean dish requires boiling a whole young chicken filled with garlic, rice, jujubes, and ginseng in a warm and delicious broth. Samgyetang, although a little expensive in comparison to other dishes, is powerfully healthy and equally delicious.

Exceptionally prominent as a side dish, Japchae is commonly served during lunch and dinner in Korean households. Thin glass noodles made of stir-fried sweet potato, thinly cut vegetables, beef, and with a pinch of sugar and soy sauce, Japchae is known for its sweet taste and chewy composition.

Variants of Japchae include spreading it over a bed of rice or with black bean sauce (similar to Jajangmyeon) collectively with colorful vegetables to eat it as a main dish.

Seolleongtang is a local dish of Seoul, a hot soup often containing ox meat and briskets, seasoned with salt, ground pepper, diced green onions, and chopped garlic. Milky white as a broth, this popular Korean dish is often eaten with rice for a full meal or with side dishes.

Unlike other soups, Seolleongtang takes over a few hours to an entire day to be prepared as the ox bones are simmered in the broth to allow the complete flavor to be extracted from it.

Gim—dried seaweed and Bap—rice together create a dish where multiple vegetables and occasionally meat is layered over rice and dried sheets of seaweed and rolled together, then cut into bite-sized pieces for a clean look.

Gimbap ranks #1 for a Korean food item to carry in a meal box for every day or special use. This popular Korean dish is visually appealing with the dark green of the seaweed contrasting the white of the rice and eventually adding color with flavourful cooked vegetables like a carrot. Because of its long-lasting nature, as it is essentially a dry food item, Gimbap has found its way up as a full meal to carry for a light lunch on a trip!

Soju is a clear, distilled alcoholic beverage commonly made from rice, wheat, barley, or other starches such as potatoes and sweet potatoes. Served in small clear glass and often taken in without any additional liquids, Soju is said to hold alcohol content between 16.8% to 53%.

So meaning burn indicates the heat in the distillation process, and Ju refers to alcoholic beverage, collectively meaning ‘burned liquor,’ it’s origin dating back to the 13th Century. Soju is the most common beverage consumed by Koreans in terms of alcoholic drinks and has made its appearance in most Korean produced sitcoms as well as movies.

Popular Korean dishes aren’t restricted merely to these fifteen names. However, the cuisine is gradually receiving the attention of many gourmets all around the world due to its many health benefits and its refreshing palate. Give your taste buds a little trip to heaven with these fifteen dishes as you travel around the world in the comfort of your homes with the resound flavors of a single bite!

New York is a metropolitan city that has not...
Read more
Africa

Giza is considered to be one of the most...
Read more
Appetizers

Cakes are something that almost every person loves. Whether...
Read more
Desserts

Brazil is a colourful country with its cuisine as...
Read more