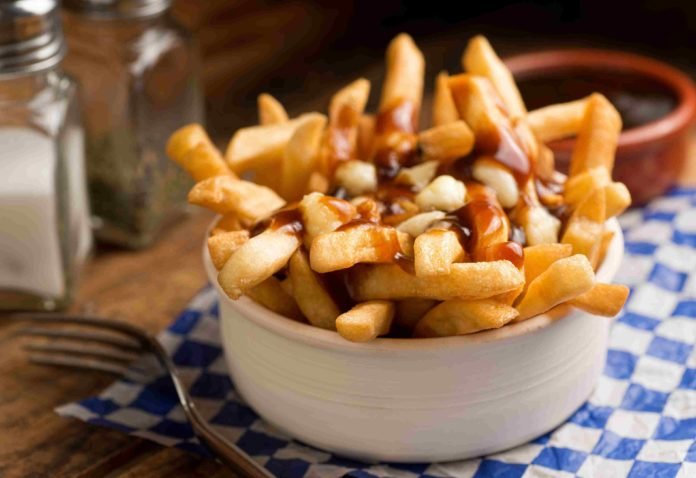 Quebec is an exquisite city in the continent of North America that is highly influenced by French culture and cuisine. The city incorporates classical architecture with a divine spread of European feel and energy. It has museums, magnificent libraries and noteworthy cuisine that leads to the consumption of authentic and flavorful dishes.

Quebec cuisine is a fusion of French-Canadian culture due to its history and the dominant culture of ancient times. The city has classic non-vegetarian dishes along with some mouth-watering vegetarian delicacies. Soups and maple syrup are found extensively in the province of Quebec.

Poutine tends to be the signature dish of Quebec city which gained popularity in the late 1950s. It is a quintessential combination of deep-fried fries made from potato, brown gravy and squeaky cheese cuds. The gravy is usually made from beef and is enjoyed by the locals immensely.

Bagel is a unique and distinctive variety of handmade and wood-fired baked dishes. It differs from doughnut which is sweeter and thinner in texture. It consists of egg and malt in a high proportion. It is most commonly baked in a wood-fired oven.

Tire sur la Neige or Maple toffee, as it is popularly known, is a sweet sugar candy prepared by boiling the delicious maple sap. It is a traditional classic candy that is consumed throughout the year in Quebec.

Shish Taouk is a customary dish that includes marinated chicken shish kebab. The succulent chicken chunks are finely marinated in lemon juice, yogurt, onion, garlic and bell pepper. It is widely popular in Lebanon and is often barbecued before consumption.

Smoked Meat is kosher-style deli meat that is prepared by curing beef brisket with delectable spices. Served with yellow mustard, this dish enjoys a smoky and peppery flavour. It needs robust bread to jam the chicken. For this purpose, rye bread is extensively used in this dish.

Tourtière is something that pie lovers would love to consume! It is a Canadian style meat pie that is filled immensely with minced pork, beef, veal or potatoes. It has a buttery and flaky crust to bring out the perfect balance in the flavour.

Couscous can be seen as tiny pasta which is made from barley or wheat. It looks like sago but is different in the making and taste. It can be consumed as a salad or can be stuffed with vegetables. It is an accompaniment to stew and can even be utilized in bread, muffin or pancake.

Tassot is a renowned Haitian dish prepared with poultry or meat. The meat or the poultry is marinated well which is then fried and served in a hot pepper sauce. Sometimes, creole sauce and fried plantains are added to the dish. Pikliz is often complemented with the dish.

Lamb is the most loved delicacy of the people in Quebec. It is nutritious, rich with sweet and savoury flavours and melts in the mouth. It is used in a variety of curries, cutlets or roasted with spices. Garlic, cumin powder and yogurt sauce often accompanied the dish.

Bouilli which means “boiled”, is classically prepared with cuts of beef and vegetables simmered in a herb-flavoured, palatable broth. There are various types of recipes by which Bouilli is made. It is usually enjoyed with a slice of bread along with mustard which adds slight acidity to the delicacy.

Fricot is an ancient Acadian dish which is why most humans call is as, “Au Fricot.” It includes onions and potatoes. Topped with chicken dumplings, it is used as a stew. Pepper extensively adds to the pungent and piney texture of the Fricot.

Pouding chômeur is fashionably called “Poor man’s Pudding.” It is happily served as a dessert which includes rice pudding and gelatin. It has a cake-like consistency with milk and syrup on the top. It is smooth, flaky and sweet for the right piece of dessert.

Pâté Chinois is also known as Shepherd’s Pie. It is prepared with mashed potatoes or canned corn. Milk, butter, pepper powder and garlic powder are used in Pâté Chinois. Onion and beef mixture is prepared which is then utilized for the dish.

Cretons is a forcemeat-style pork spread that contains delectable spices and onions. It includes pepper, cloves, ginger and nutmeg. The spread is laid out on bread or multi-grain bread. Also combined with breakfast and a huge variety of French-Canadian dishes.

Oreilles de Crisse, a conventional variety made with deep-fried smoked pork jowls. A crispy delight that is drizzled with maple syrup. Oreilles de Crisse is served as a supplement to stews, beans, or fried eggs.

The prominent Soupe aux Pois is a creamy pea soup with chunks ham, carrots and celery. It is a versatile soup with immense nutrients and proteins. It is simmered with strong spices like turmeric, cumin and fine coriander powder.

Euphemistically translated as nun’s pastries, Pets de soeur are pastries filled with brown sugar and smooth butter. The mixture is then rolled and baked to the perfect temperature. Topped with cinnamon powder, it is adorned with hazelnut spread.

Maple Baked Beans, are the perfect delicacy for snacks as well as supper. Bacon, onions and ginger contribute to be the key ingredients after beans. Topped with maple syrup or brown sugar, this dish consists of a sweet-savoury texture.

It is a baked dish with a pastry base topped with a filling that differs with preferences. While some modern tarts include fruit fillings, others include a sweet or savoury flavour. A dish with the goodness of sweet, it enjoys a shortcrust for the base. The wedges may also be covered with smooth whipped cream or vanilla ice cream.

Marine drive is definitely the heart and soul of...
Read more
Appetizers

8 Awesome Ways to Twist Your Kurkure

Kurkure is one of the most popular snacks among...
Read more
Asia

One of the popular shores along the Arabian Sea,...
Read more

Lucknow, often regarded as the city of Nawabs, will...
Read more
Previous articleThe Stars of the Irish Cuisine to Savour
Next article12 Local Dishes to try out in Auckland