13 Dishes You Must Try When in Copenhagen 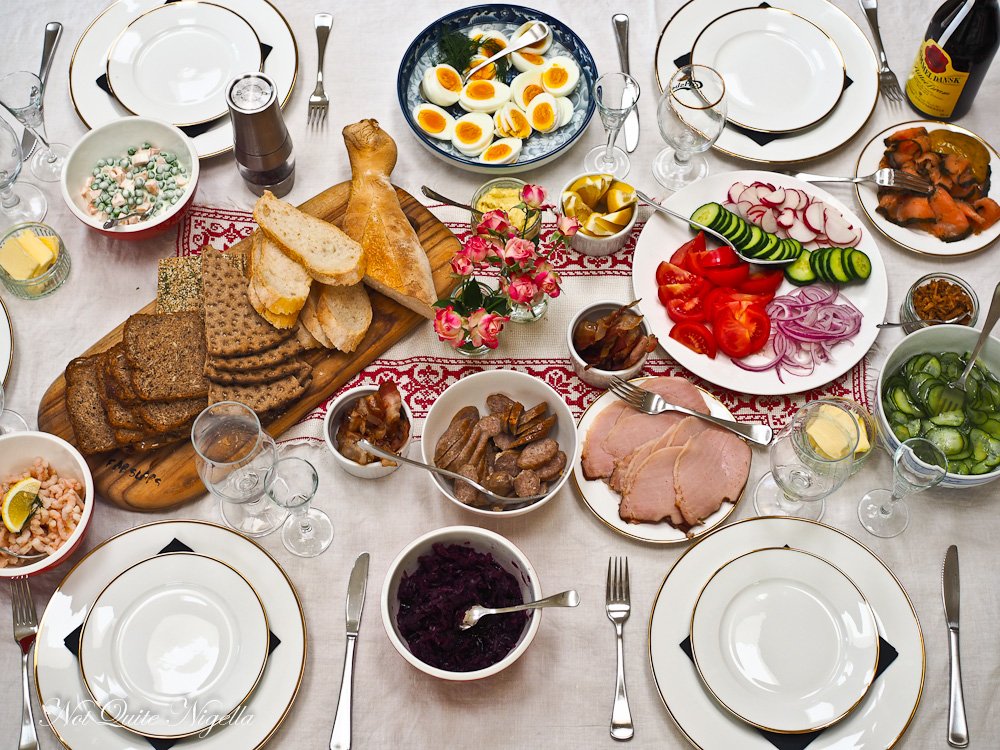 Copenhagen is often considered the happiest city on Earth and something tells me it’s the food. Denmark has become known for bringing the New Nordic Cuisine on the foreground with Copenhagen hosting a great number of high-end restaurants with Michelin stars. Their artful culinary is exceptional and so here are the dishes you absolutely need to try when in Copenhagen. Velbekomme!

13 Dishes You Must Try When in Copenhagen

Smørrebrød is a traditional open-faced sandwich that usually consists of a piece of buttered rye bread, a dense, brown bread, topped with commercial or homemade cold cuts, pieces of meat or fish, cheese or spreads and garnishes. You eat it with a knife and a fork when eating smørrebrød in a restaurant.

Rød Pølse is the Danish equivalent of American hot dog. The main difference is that the Røde Pølse is the red sausage as it is dipped in a red dye known as carmine. Since hot dog stands are widespread in Denmark, some people regard it as one of the national dishes. Rød pølse are to be heated in hot water and are commonly served with remoulade, mustard or ketchup, fried onions and gherkins.

Æbleskiver are solid like a pancake but light and fluffy like a popover. They are a type of pancake puffs that are cooked in a special stovetop pan with half-spherical molds. These traditional pancake balls are served during Christmas. However, they are also perfect for the rest of the year. The fluffy and soft centre and crisp coating make it an extremely appealing snack.

It is roasted pork that is baked with spices, bay leaves, and cloves and is usually served with boiled and/or caramelized potatoes. A staple during Christmas again, this is usually the highlight at the table. The traditional method of preparation is to roast a joint of pork from the breast or neck without removing the rind. A sharp knife should be used to cut the skin through to the meat in narrow strips.

Rye bread or Rugbrød as it is called in Danish, is a type of bread which is packed with different seeds, grains and cracked rye and is, therefore, a very healthy alternative to regular white bread. Ingredients typically include rye flour, cracked or chopped rye kernels and other seeds such as sunflower seeds, linseeds or pumpkin seeds. It is served buffet-style with any number of fine toppings and is also a common accompaniment for many meals.

Stegt means ‘fried’ and flæsk means ‘strips of pork belly’. Stegt flæsk med persillesovs is crispy fried pork belly with creamy parsley sauce and boiled potatoes. It is lightly salted but not smoked. Stegt flæsk can also be served with apple compote. The main difference between bacon and flæsk is that flæsk will never be sold smoked, and often not salted either.

Danish pastries, including the one known simply as a “Danish” overseas, fall under the category of wienerbrød. In Copenhagen, it is known as wienerbrød and they will have many varieties at the local konditori. It is a multilayered, laminated sweet pastry. Danish pastry is made of yeast, milk, eggs, sugar, and large amounts of butter or margarine. The finished pastry is airy and light. It is shaped in different ways but usually a braid and filled with marzipan or preserves or topped with nuts, seeds, or chocolate.

Read also – 10 Indian Summer Chillers to Try When In India

Gløgg also is known as mulled wine and is a popular winter drink. Although it is a drink, gløgg definitely deserves a place in this list considering how popular and recommended it is. It is a beverage usually made with red wine along with various mulling spices and sometimes raisins. It is served hot or warm and is alcoholic, although there are non-alcoholic versions of the same. Red wine is traditional in gløgg, but white wine is a nice change of pace as well.

Frikadeller are flat, pan-fried meatballs. There are many different variants of Frikadeller, however, the basic ingredients are always ground pork, onions, milk, eggs, flour and salt, and pepper. It is a dish had on a regular basis. These could be served with some fresh homemade bread with sunflower seeds or some boiled potatoes. They can also be had as a topping on bread to enjoy it as an evening snack.

Don’t miss Grød if you’re an oatmeal lover in Copenhagen! Grød is basically porridge. It is affordable and good for the soul. Grød is always just the right meal, even among the hipsters in Copenhagen’s trendy Nørrebro district. It is the perfect breakfast staple and I’m sure you will have this more than once during your stay.

Fiskefrikadeller (fishcakes) are slightly elongated, pan-fried patties much like regular frikadeller (meatballs). They are normally not breaded. Its basic ingredients are minced fish meat mixed with flour, mashed potatoes, smoked pork, onion, eggs, spices, and milk. They are fried until the outer coat is brownish in colour.

Hindbærsnitter or ‘raspberry bars’ is a cake made of a shortcrust pastry. It is two sweet baked shortcrust pastry pieces, layered with raspberry in the middle. Hindbærsnitter is topped with a nice layer of white icing and sprinkles. It is usually had as a snack along with tea. These are basically the Danish version of Pop-Tarts.

Malai Ghewar: The Tastiest Treat Ever

As we all know, India is extensively known as...
Read more
Asia

A beautiful island located in the south of East...
Read more
North America

The cuisine of Mexico stands as a strong pillar...
Read more
Appetizers

So you are planning to jet off to Miami....
Read more
Previous article
11 Vegetarian Dishes You Must Try When In Tibet
Next article
8 Desserts You Have to Try While You are in Goa