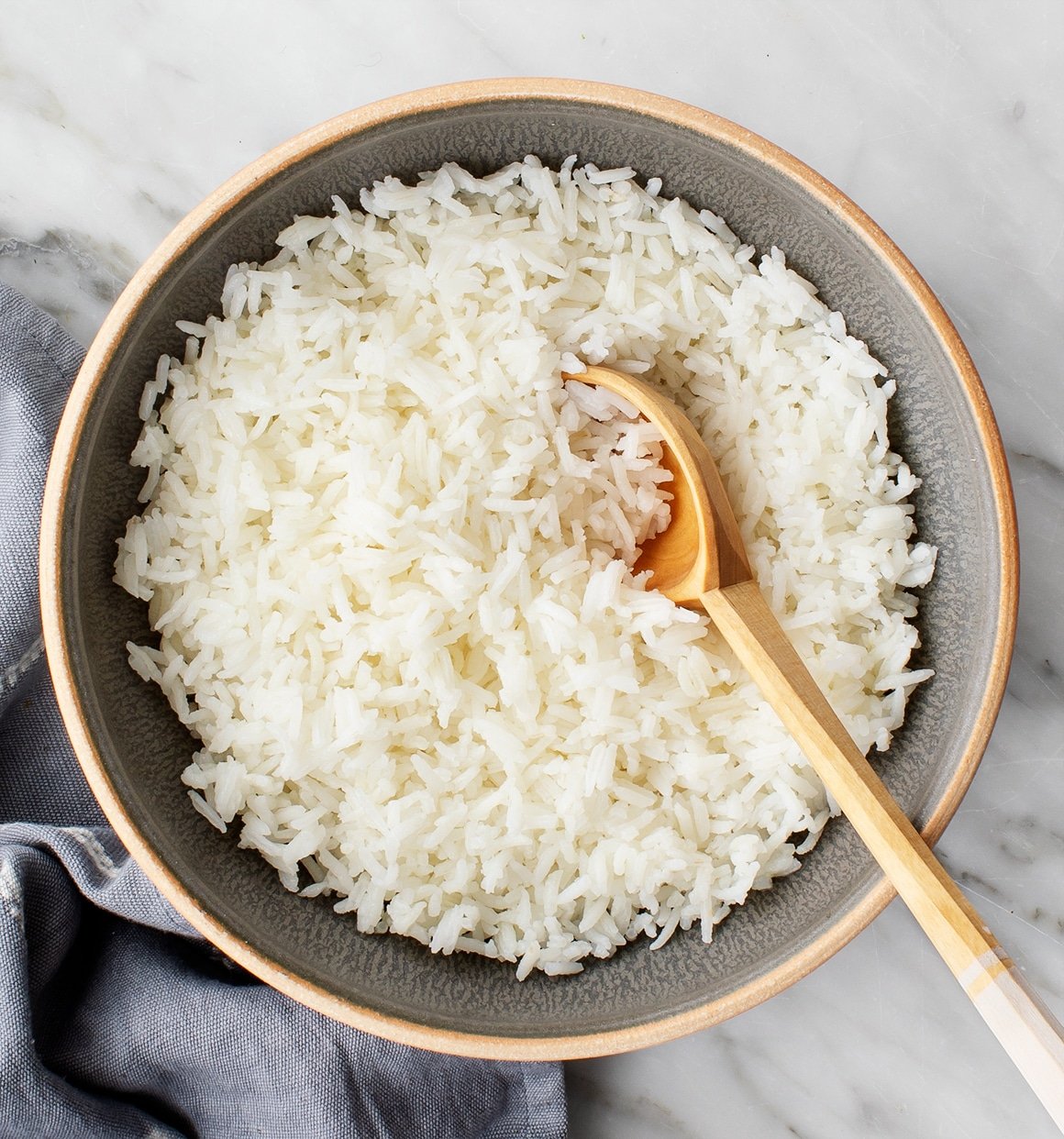 Baas, Chawal, Reis, Riz, Kome, Arici—Rice! A staple to countries abounds, rice is prevalent in numerous nations and within many hearts. These staple rice dishes embody the warmth of homely food and the spirit of home. Rice is the one food item that connects You and Me. From little hard grains to boiled soft white rice, here are 11 staple rice dishes from 11 different countries that will remind you of home.

Warm cooked rice, stir-fried over medium heat with fresh green vegetables, pieces of meat in sizzling cooking oil or margarine, spiced with Kecap Manis (sweet soy sauce), garlic, grounded shrimp paste, tamarind, chilli, and shallot, Nasi Goreng is a Malaysian staple rice dish that is both visually stunning and mouth-watering. Accompanied by additional ingredients like egg, chicken, and prawns, the scrumptious aroma of this staple rice dish can generate hunger just by the sight of it.

Home to Malaysia and Indonesia, Nasi Goreng is a favourite worldwide for its earthy and smoky flavour from the caramelized sweet soy sauce and spicy chilly paste. Nasi Goreng captivates its enthusiasts with a perfect balance of sweet and spicy flavours.

Risotto is a north Italian rice dish heated with broth until it achieves a creamy white consistency. Traditionally used in a wedding feast, a Risotto initially showed an impressive yellow colour due to Saffron used to bring out its flavour.

However, recently, Risotto possesses a more refined and prim look of creamy white rice, which is first cooked in a soffrito of onion and butter to cover it in a fat film. A white wine, which when added, is absorbed by the grains and stirred continuously in a broth consisting of either meat or vegetables until it attains a smooth, creamy texture. The rice is finally served with grated parmesan cheese and butter, creating the precise vision of a creamy delightful rice dish.

Jollof Rice or Benachin has a fascinating fact surrounding it. This staple rice dish’s primary ingredients are rice and tomatoes, neither having any saturated fat or cholesterol, making Jollof Rice, despite being a Carbohydrate dish (as rice contains carbohydrates), a relatively healthy option for your dinner table.

Jollof is first prepared by cooking seasoned meat or chicken and then frying it along with onions, pepper, tomato paste, tomatoes, and other vegetable oil spices. Once the ingredients show a light brown colour, rice is added and stirred. Jollof Rice is then served alongside other dishes like salads or Shito, a particular type of Ghanaian pepper. Additionally, this staple rice dish also has a Nigerian alternative as just one of the many ways to make the most of this rice dish!

Crisp, caramelized rice taken from the bottom of the pot when rice is cooked is the Iranian specialty, Tahdig. It is generally served to guests as both a side dish as well as the main dish.

While Tahdig can be prepared with saffron, potato, tomato, yogurt, bread, and other vegetables, served as crunchy saffron rice, many variations speak otherwise. Pieces of juicy saffron chicken are sometimes arranged between layers of thick yogurt and egg rice to add a pleasant surprise to the tangy taste of Tahdig.

Respected as Jordan’s national dish, Mansaf is a staple rice dish enjoyed in many areas like Iraq, Syria, and Saudi Arabia. A Jameed broth is prepared from thick yogurt by boiling sheep or goat’s milk to cook Mansaf. Pieces of lamb are also cooked in it. The dish is then served in a large tray with a flatbread layer, topped with rice and then meat, finally garnished with almonds and pine nuts.

Speaking of desserts, Champorado is a sweet chocolate rice porridge from the Philippines. Served at tea or during snack time, Champorado prevails as a dessert favourable to all! Traditionally, it is made by boiling sticky rice with cocoa powder and stirring with milk and sugar to loosen it. The mixture is then stirred till it attains thickness and then served. Champorado is simple to make and perfect for a quick snack or when you’re craving something sweet!

Paella directly translates to “frying pan,” according to the ancient Valencian language. Traditionally cooked over an open fire, fueled by pine and orange branches, Paella is a staple rice dish enjoyed in Valencian homes. Green vegetables, meat, paprika, saffron, rosemary, garlic, grated tomatoes, and beans are added to be sauteed in heated oil in the preparation of Paella. Rice, too, is added and stirred till the vegetables grow softer. Rosemary is removed before the dish is served, adding a tangy flavour, and then it is garnished with squeezed lemons.

Biryani, the love of gourmets worldwide, is an exotic twist to your everyday white rice. But did you know that Biryani gets its name from the Persian word Birian which means fried before cooking! Biryani is a mixed rice dish but can also be distinguished as mixing semi-cooked rice in prepared curry, meat, and spiced with various Indian spices like pepper, cloves, cardamom, cinnamon, mint, ginger, green chillies with tomatoes, onions, garlic. And while there is a great discussion whether the Biryani is different from Pulao/Pulav, another mixed rice dish prevalent in India, Biryani is said to have a more significant gravy portion.

Navratan Biryani, a variant of the same, is said to hold more premium ingredients like saffron, cashews, kishmish (raisins), and fruits like app pineapples. Biryani stimulates the stomach with many such variants with its rich, inviting aroma, making it a fitting item as India’s staple rice dish!

Seizing its name from the Japanese terms Tonkatsu (pork cutlet) and Donburi (rice bowl dish), Katsudon is merely rice in a bowl topped with deep-fried pork cutlet a rich broth, egg, vegetables, and seasonings. The pork cutlet is prepared by seasoning the meat and dipping it into flour, bread-crumbs, and then skillet frying till it shows a rich light-brown colour. The staple rice dish is garnished with chopped vegetables for a healthier balance and contrasting colourful appearance.

Interestingly, this staple rice dish is eaten by Japanese students on the night before an important exam to show good results as Katsu in Katsudon is synonymous with the word Kats meaning “To Win!”

A staple rice dish in every Korean home, Bibimbap generally includes sauteed and seasoned vegetables, kimchi (traditional fermented vegetables), soy sauce, fermented soybean paste, and chilly pepper paste, served over a bowl of warm rice. The specialty of this dish is that its variants are endless! Bibimbap can be eaten with simple seaweed strips and salt to cooked vegetables for a vegetarian touch with a thin broth and a spicy chilly pepper paste.

While most rice dishes involve cooking the rice with its ingredients, Pabellón Criollo focuses on arranging cooked rice along with shredded beef and stewed black beans. Visually inviting with its arrangement, this traditional Venezuelan dish is the local version of the rice and beans commonly found throughout the Caribbean.

The modern version of this staple rice dish can be prepared by first allowing meat, onions, and bouillon to simmer with a closed lid. Water or a rich broth is continuously added. When cool enough to handle, the prepared meat is shredded and lightly browned by boiling in a puree of vegetables, tomato sauce, red pepper, garlic, and onions. Pabellón Criollo is a staple rice dish that is quick to prepare, and the meat can be substituted with vegetables or fritters for a crunchy vegetarian twist!

These 11 Staple Rice Dishes from 11 Countries are conclusively evidenced to show that rice, a staple so frequently used that it is often ignored, is precisely the one food item that defines home and the warmth of a family in the world. Traditional, modern or varied, Rice is the one food item that does not lose its potency with the proficient flow of time. It exists in every home that can afford it, fills every hungry stomach, and leaves behind only satisfaction and gratitude.

The Maldives is a popular holiday destination for people,...
Read more
Desserts

Himachal Pradesh is the favorite place for a weekend...
Read more
Asia

2020 without a doubt has been a very unfortunate...
Read more
Asia

10 Must Try Famous Desserts Of Jabalpur

Do you have a sweet tooth and you love...
Read more

Somalia, located in the Horn of Africa, is an...
Read more
Previous article
28 Desserts You Must Try out when in San Francisco
Next article
28 Best Dessert You must try out in Japan