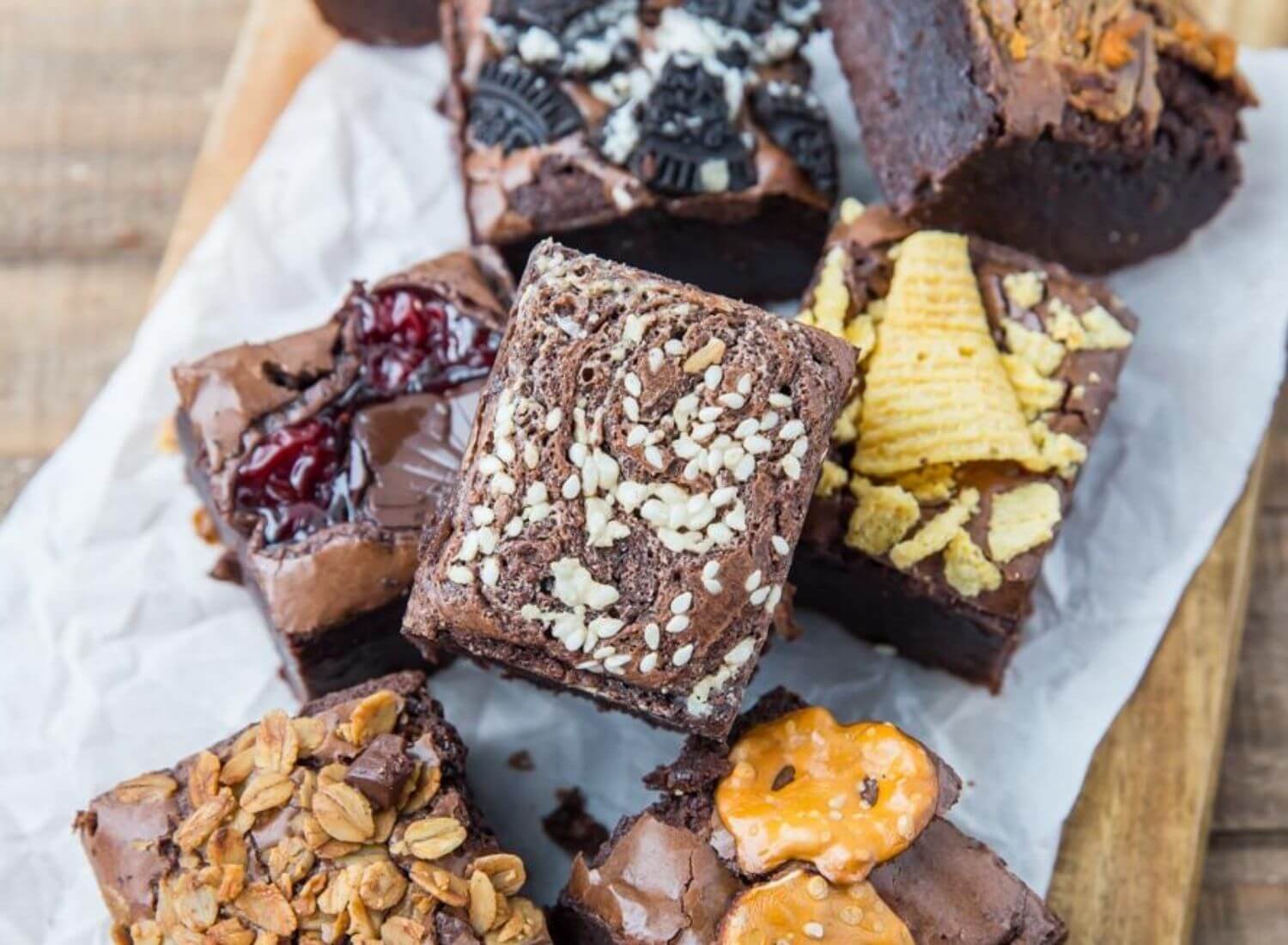 Brownie is a wonderful choice for any occasion. It may not be as huge as a cake but is neither small like a cupcake. It is just the perfect dessert to complement the meal and satisfy the soul. It is no rocket science to prepare brownies. After all, they are most of the time merged with hilarious ingredients. It might be easy to consume brownies,s however confusing to twist them into other flavours. Here is an exotic list to light up your day with numerous brownies.

Buckeye Brownies would make you go La-La with just one bite. This lip-smacking brownie is prepared with brownie mix, eggs, and the normal vegetable oil. They are mixed to be baked in an oven. A welcoming mixture of peanut butter and sugar is prepared with continuous whisking. A flavorful, creamy peanut butter spread is layered over the brownie while an ever smooth chocolate spread tops the dessert. Colorful sprinklers can add more charm to it.

Ever imagined how wonderful it would be if you can have fudge and brownies together? This awesome chocolate fudge brownie counts as no sin with its incredible flavor. Dutch-processed chocolate is used in the preparation. Eggs, vanilla extract, cocoa powder, and sugar are mixed well with the flour for the baking process. A fine cocoa mixture is prepared with butter and salt for a nice glaze on the top. It has a fudgy texture with a palatable garnishing of chocolate chips.

How can you miss out on the cheesy-gooey texture of these brownies? Cream cheese brownie is the right delicacy to enjoy a creamy texture with an excellent fusion of flavors. The spread is prepared with cream cheese, sugar, and vanilla extract. Once the spread is lump free, the cream cheese spread is smoothly drizzled over the brownie mixture. This ensures the amalgamation of smooth and fluffy texture at once. The brownie can be garnished with hot chocolate sauce or chocolate chips.

Caramel lovers could definitely say Whoa! This one is for those who love to twist their brownies with the ever inviting caramel sauce. Caramel sauce that has a slight edge of salt turns out to be perfect for any day. Caramel is mixed with eggs and cocoa solids. It ensures an even taste of caramel with chocolate. The spread is stuffed between the brownies that have a pinch of sea salt within.

Mint might sound weird at first, but the ever-exciting mint would thrill through your throat with each piece of this exquisite mint brownie! Mint Frosting is prepared with butter, peppermint extract, and sugar. Brownies are then topped with the frosting that would bring the right thrill to this dessert. The brownies are layered with thick chocolate ganache prepared with heavy cream and chocolate solids. This brownie is a delectable dessert for a party that drives people crazy!

Brownies have been associated with almonds and cranberries for quite a long time now. However, brownies with walnut happen to remain classic and authentic for chocolate lovers. The crunch of walnuts with its rich flavour between the brownies is just right to lift your mood. The mix is whisked with some walnut pieces before the baking procedure. This ensures an even distribution of yummy walnuts. Once baked, these brownies can be garnished with extravagant chocolate sauce or chocolate chips.

One can have coffee or a coffee brownie; it is the same! Brownie imfused with a bitter flavour like that of coffee merged with chocolate tastes awesome. This brownie is prepared with the addition of vanilla essence and coffee powder. Coffee syrup is also a great alternative to coffee powder. It is generally served with a dark drizzle of chocolate syrup—nothing merrier than more coffee submerged in soft brownies.

Let’s crunch and munch! Oreo Brownie could work like magic for parties as well as crazy night outs. Oreo is finely crushed into small cubes and added to the brownie mix. This ensures that pieces of Oreos are spread evenly in the brownie mix. Some chocolate chips and Swiss chocolate turn the brownie into a piece of heaven. It has a soft texture with a crunch in every bite.

Chocolate definitely should not take the limelight all the time. So here come Raspberries to the platter! Raspberries make a great fair with brownies since they are juicy with a promising flavor. Raspberries are merged with flour, cocoa powder, and chocolate chips. This gives brownie a fudgy texture with juice packed in the layers. Every bite gives a sprinkle of raspberries along with the not so forgetful flavour of decadent chocolate.

Why have just a brownie when you can happily have Marshmallow Crunch Brownie? It is a heavenly combination to be had at least once in life. Brownies are prepared with flour, dark cocoa powder, and vanilla essence. Espresso essence can also be utilized for a bitter-sweet taste. It is baked till the brownies have a fluffy texture. Marshmallows are then placed in the mixture for the perfect bake. The mixture is baked, which results in the scrumptious flavour of Marshmallow Crunch Brownie.

Not everyone likes everything sugary and sweet. Here is the perfect brownie with a magical fusion of sweetness and salty flavour right in it! Such a brownie mixture generally includes mild chocolate or Swiss chocolate. It enhances the sweetness in the overall flavour of the brownie. Such a brownie becomes a great supplement to the rich Caramel sauce. But what makes it salty? Well, that’s the light sprinkle of sea salt and nuts on the brownie! That turns it into a sweet and salty dessert for the day.

Mint is the magician. The promising flavour of mint dominates peppermint brownie. The brownie batter basically includes cocoa powder, butter, eggs, and dark chocolate. The list is topped with peppermint extract that rules the flavour of the dessert. The mixture is mixed with flour and salt. Peppermint chocolate is deposited on the brownie batter. The brownies are well garnished with striped peppermint candies that leave no chance for any downs in the flavour.

Drink? Dessert? Why not both? Red wine brownie is the perfect delicacy to be consumed when you want both dessert and drink. It gives a punch to your gut, not in a sip but a bite! Brownies with red wine promise a boost of happiness in your soul with the ever delicious flavor. The brownie batter comprises butter, cocoa powder, vanilla extract, and the major ingredient, Red wine! Once the brownie is baked, every bite gives a great kick of red wine submerged with hot chocolate sauce on top.

Crunch crunch with Kit Kat! That is how you spell a brownie filled with the crunchy texture of Kit Kat. Kit Kat brownies have recently gained popularity due to the iconic fusion. The smooth texture of brownies becomes a great partner with this chocolate bar. It is literally eating a little crunch between the indulging flavour of dark chocolate. Kit Kat is used for topping brownies with a dash of chocolate chips.

14 Amazing Dishes to try out in Puri

Chocolate is something that is always going to be...
Read more
Asia

Stepping into Kolkata, the City of Joy there are...
Read more
Appetizers

The cuisine of Mexico stands as a strong pillar...
Read more

Candies are one of the major parts of the...
Read more
Previous articleTop 10 Spices And Herbs For Better Immunity
Next article10 Easy Side Dishes You Can Add To Your Everyday Meals