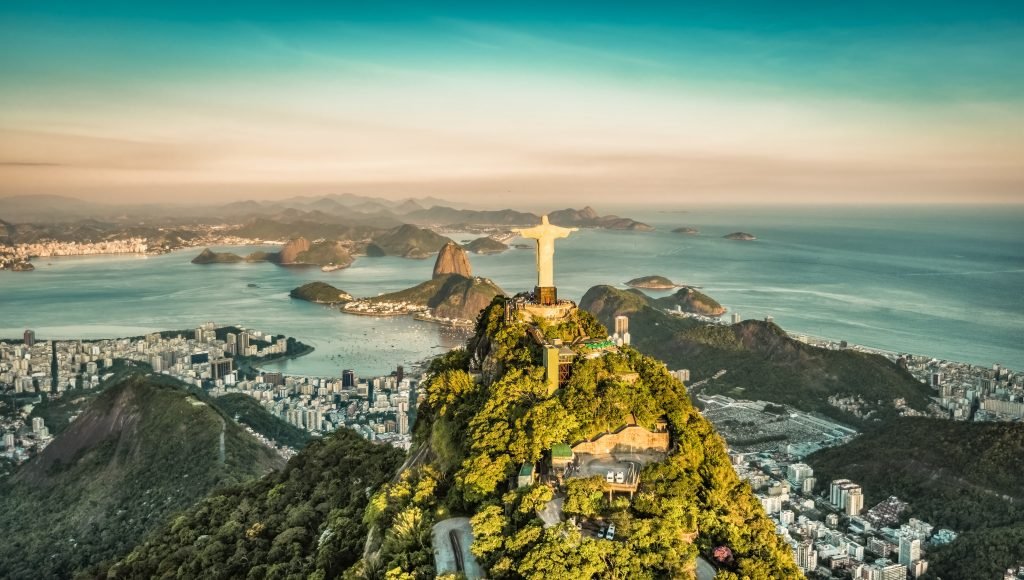 Brazil is blessed with a variety of candies and traditional desserts passed down to the modern age to satisfy the sweet-toothed, or as they would say in Portuguese, the guloso. Often their desserts are variations on Portuguese desserts made with local ingredients. They really know how to end a meal and make it memorable. So here’s a guide to the 15 desserts you need to help yourself to.

Brigadeiro is a traditional Brazilian dessert made using condensed milk, butter, cocoa powder, and covered with chocolate sprinkles. They can be served in cups, jars, tubes, or small boxes.

This is a popular baked Brazilian dessert, made primarily from sugar, ground coconut, and egg yolks. It is custard and usually presented as an upturned cup with a glistening surface and intense yellow colour. This mixture can also be made in a large ring-shaped mould. In this case, it is called a “quindão” and served as slices.

The cake batter for bolo de rolo is made with flour, eggs, butter, and sugar. This dough is wrapped with a layer of melted guava, making it look like a swiss roll. However, the layers of dough and guava are way thinner than the ones seen in a swiss roll, and the taste is obviously completely different as well.

Canjica is a sweet dish, associated with winter festivals, which in Brazil is in June (Festa Junina). The dish is a porridge made with white de-germed whole maize kernels (canjica), cooked with milk, sugar, and cinnamon until tender. Coconut, coconut milk, and some cloves are added as well. Other ingredients such as peanuts and sweetened condensed milk can be added as well.

Conserva de coco is a traditional coconut candy or confectionery. They are oven-baked and served at room temperature to provide the chewy and soft texture. They are made with eggs and shredded coconut and the traditional variations are golden brown, without any food coloring. They are often garnished with almond. In Brazil, they are usually long and thin instead of being round.

These Brazilian crepe-like pancakes are popular street food made with tapioca flour. They are versatile and can be cooked with a variety of sweet and savoury fillings like cheese, coconut, or chocolate. Tapioca crepes are good for breakfast and can be served with butter alone.

Açaí na tigela (açaí in the bowl) is a Brazilian dish made of frozen and mashed açaí palm fruit. It is served as a smoothie in a glass or a bowl. It is usually topped with granola and banana, and mixed with various other fruits and guaraná syrup.

It is a Portuguese treat that is extremely common in Brazil. The traditional queijadinha is prepared with grated coconut and cheese, sweetened condensed milk, sugar, butter, and egg yolks. Queijadinhas are very common in bakeries and children’s parties.

Goiabada is a conserve made of red guavas and sugar. It may come in many widely different possible textures, ranging from a thin paste, meant to be eaten with a spoon or spread on bread or cakes, to quite hard slabs that can be sliced with a knife only. In Brazil, goiabada is eaten with Minas cheese. It is also a popular spread on toast for breakfast.

Pé de Moleque is a traditional Brazilian candy made out of peanuts. It is the Brazilian Peanut Brittle. It is very nutty and buttery as well. A great sweet during Brazillian festivals.

Made of ground peanuts, sugar and salt, this is typical Brazilian candy and the most loved one as well. It is also very common during the Festa Junina, an annual festival celebrating the caipira lifestyle. It is popular for its peculiar dry texture and sweetness.

Compota is basically jam. It is a sweet mixture of fruits boiled with sugar and even spices at times. It can have whole pieces of fruits or be a complete paste. It can be served chilled or warm.

Even though the name translates to Dutch pie, it is not Dutch in the least bit and is not available anywhere in the Netherlands or Europe. There is more than just one way to prepare this but the basics remain the same. Surrounded by a crust of cookies, it is topped with a layer of chocolate.

Pamonha is a paste made out of sweet corn. Variations may include coconut milk. Pamonha can be savoury or sweet. If sweet, ground coconut pulp is a common addition when there is one, but the majority is served plain.

Top 15 Must Try Snacks in Disneyland

Disneyland is a place where everyone wants to go...
Read more
North America

Vancouver is one of Canada’s densest, most ethnically diverse,...
Read more
Exclusive

We all love food. For all the foodies out...
Read more
Appetizers

15 Exquisite Dishes to try out on Your Visit to Bathinda

A city of lakes, Bathinda is one of the...
Read more
Australia

12 Local Dishes to try out in Auckland

Auckland- a place known for its visitor-friendly hospitality and...
Read more

Somalia, located in the Horn of Africa, is an...
Read more
Previous article
10 Non-Vegetarian Dishes To Try In Jammu and Kashmir
Next article
29 States 29 Famous Dishes one must Try in India