A road trip on the highway is incomplete without food, especially from a Dhaba. Dhabas, referred to as roadside restaurants, give major ‘desi’ vibes with their ambiance and culinary techniques. Dhabas are known for serving cuisine which is traditional and related to the state where the cooks come from (majorly from Punjab) in India. Dhabas could be located easily, relieving the hunger pangs that grow with travel sickness.

A Dhaba can be seen near a petrol station, which is a planned location for the comfort of the truck drivers, but what makes its different? The food from Dhaba is made with traditional ingredients, with traditional culinary techniques and with heaps of Makhan (white butter) and Ghee (clarified butter).

The food is cooked with the whole heart. And there is a unique aroma and flavor in the food adding up to the overall taste of the food. The food is cheap at a Dhaba but would surely feed the soul in you. Here are some wonderful dishes from a Punjabi Dhaba:

The Lassi from a traditional Punjabi Dhaba is no match to anything else to give you a refreshing experience from the traveling blues. While at a Dhaba, it’s recommended to order Lassi prior to a meal and enjoy it till the last as the quantity of Lassi and food won’t leave the room for a second glass.

The sweet Lassi at a Dhaba tastes a bit different as it is made by traditional techniques rather than the use of any machine. The thick texture of Lassi and the sweetness invoking happiness from every corner of your mind is an experience to try.

It’s a different experience to eat the favorite combination of Dal Makhani and Jeera rice while sitting beside a highway and hearing the sound of the road and winds bustling along the wide highway. The creamy texture of Dal Makhani, giving the taste of various spices cooked with Rajma beans, is one of the delectable dishes at a Punjabi Dhaba.

The dish gets that aroma and flavor through the masalas or spices used in the dish as they are traditionally made. Some Dhabas even grow some vegetables and ground their spices in their own way. The main technique that gives an earthy aroma is the cooking style, which is cooking the food slowly on an earthen pot. The Dal Makhni can be paired with steamed rice or with Naan or Chapatis.

Paneer Butter Masala, one of the sweet, creamy dishes, is cherished by every Indian. The dish should surely make its way to the order list, as Dhabas have a unique way of cooking it. Specifically, with the Paneer or cottage cheese that is bought directly from a dairy and is fresh. Many times, Dhaba owners have their own dairy and bring freshly prepared Paneer to the kitchen.

The soft texture of the Paneer drowned in the sweet and slightly spicy gravy of tomatoes, combined with cashew nuts, butter and spices, is a delight in itself. The dish would surely make you lick your fingers.

Punjabi cuisine is known for different parathas with different types of stuffings. Aloo Parathas are sure to taste good at a Dhaba as they are cooked with huge dollops of clarified butter and served with white butter over them, with curd and pickles as a side dish. Aloo Parathas are cooked over an earthen stove under fire, along with the potato stuffing combined with spices, which gives the dish a rustic flavor.

The specialty of eating a Naan at a Dhaba is the unique technique the cooks use for cooking it. Naan, an Indian flatbread, is cooked in a Bhatti (tandoori oven), which gives it a rustic taste. Bhatti is not like a metal tandoori oven. Instead, it is made of clay. It has charcoal and fire inside and an insulating material outside.

The Dhaba cooks give the dough of Naan bread, shape, and stick it on the inner walls of Bhatti, letting it cook. The Naan bread or any other Indian bread gets a smoky and earthy flavor after being prepared in a Bhatti. The naan, thereafter, is served with a dollop of clarified butter over it along with any Indian vegetable.

The nutritious Palak Paneer gets a makeover in a Dhaba style, while its flavors get more impact while cooked on an earthen pot. The dish Palak Paneer becomes tastier with traditional spices, soft Paneer, and nutritious spinach. The dish is cooked with a puree of spinach and seasoned with other ingredients like garlic, ginger, and many other spices.

The dish gets a thick consistency, while at the corners, you would see a good amount of oil used in the dish. It is served with a dollop of white butter and rice or any other Indian bread.

The most iconic dish, Chole Bhature, gets a more savoury taste when cooked in a Dhaba style. The chickpeas used in the chole are first soaked and tied in a cloth. Then, these are cooked in tomato puree combined with other spices. The Bhature in the Chole Bhature is bigger and rises for that prick, one does, and the steam that releases gives the aroma of the dish when it is served. The dish might make you worry about the oil used, but that is the main ingredient behind all that taste.

The delicacy is a specialty and a dish giving earthy flavors in every bite, treating your taste buds with the simplicity the dish holds.

Phirni or Firni is an Indian sweet pudding that is made most of the time during some special celebrations or festivals. The delicacy consists of cooking ground rice and warm milk and serving in traditional earthen bowls called Shikoras.

The dish gets more flavors after adding rose petals and saffron strands. Also, these ingredients add aroma and color to the dish.

The duo of Sarson ka Saag, a vegetable paired with Makki di Roti, an Indian bread, is like a match made in heaven. Sarson Ka Saag is a green vegetable in Punjabi cuisine, which is prepared by cooking three leafy vegetables- Palak, Sarson, and Bathua, with a perfect combination of spices. While, at a traditional Punjabi Dhaba, one can see a variation; the leafy vegetables are cut in a different way than by knife. The vegetable is served along with a dollop of white butter and Makki di Roti.

The Indian bread Makki di Roti is an Indian bread made of maize flour and cooked with clarified ghee on a tawa. While in a Punjabi Dhaba, there is a big Tawa where these Rotis are cooked. The food is cooked over a ‘chulla’ (fireplace), giving it an earthy flavor. The dish is served with jaggery and pickles along with steamy hot, buttery Makki di Roti.

So, all the wanderers do drop by these eateries while on a road trip with or without a destination and get a whole traditional vibe along with authentic flavors. 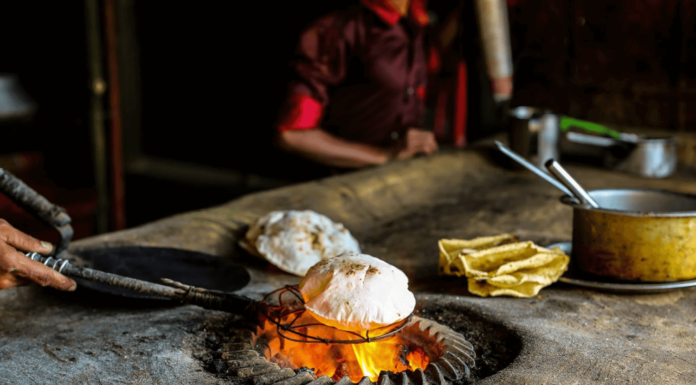